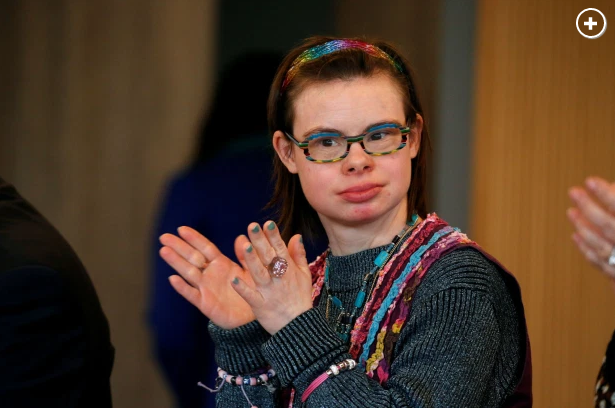 ARRAS, France – Eleonore Laloux has battled all her life to be treated like others. Now the 34-year-old is waging a new campaign: to become one of the first women in France with Down syndrome to win a local council seat in this month’s municipal elections.

Armed with a broad smile and a gritty determination, Laloux is canvassing for support in Arras, her hometown in northern France, talking up her ambitions for a cleaner town and improved access for disabled people. But above all, a fairer society.

“I’ve fought hard to live with Down syndrome. It doesn’t trouble me any longer,” Laloux said.

“Now I am fighting for inclusion. Handicapped people have their place in society.”

As a young girl, Laloux’s parents refused to place her in a special needs school, instilling in their daughter a self-belief that would later help her overcome bullies and secure a job as an administrator in a private hospital.

She has made peace with her condition, she said. She founded “Friends of Eleonore”, an association which challenges the social stigmas confronting Down sufferers and has written a book, “Down syndrome, so what?”

aloux’s drive has not let up as she makes her first foray into politics.

She has drawn up a list of a dozen priorities for Arras, a relatively affluent town of 40,000 people in the economically depressed northeast of France.

They include audio and brail aides to help the hard of hearing and sight cross streets, electric buses with wheelchair ramps and dedicated parks for dogs.

“I have loads of ideas in my head. I work on them every morning, every day,” she told one Arras resident on a walkabout in the town’s Baroque main square last week.

Laloux is running on the ticket of incumbent mayor Frederic Leturque, a centrist who won more than half the vote in 2014 and is favorite to win again.

“The disability she has, the force of her character, the ideas she has, will make us think differently,” Leturque told Reuters after a meeting with his team of candidates.

When she’s not at work or on the campaign trail, Laloux will pick up her electric guitar to relax. Bob Dylan is a favorite.

With less than two weeks until the March 15 first round of France’s municipal elections, Laloux is making headway in persuading townsfolk that she is a deserving candidate.

“I was surprised when I saw her on the list. But you know, what a great idea,” chocolate shop worker Chantal Legrand said, turning to Laloux to add: “I’m happy for you.”