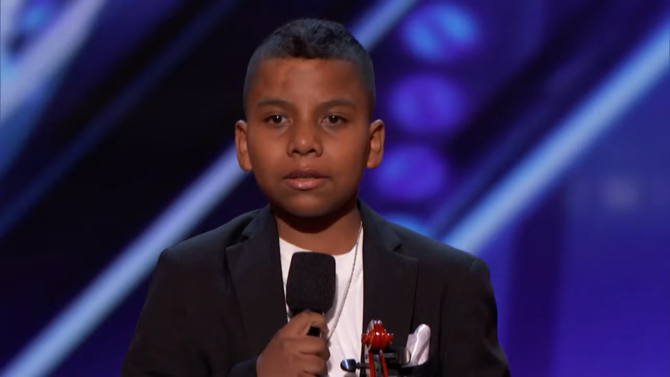 Tyler Butler- Figueroa may only be a fifth grader at Walnut Creek Elementary in Raleigh, yet his story is nothing short of amazing.

At the age of four, Tyler’s mother learned that her baby boy had cancer. His illness first came to light when she suspected something was wrong at dinner one night – “One day, we were out to dinner, and we said something doesn’t look right with Tyler. He turned kind of pale. So a mother’s instinct said ‘let me get him to the emergency room’.”

Sadly, her intuitions were right when the doctor diagnosed Tyler with cancer. This unfortunately led him to being bullied at school. He shared that once he started losing his hair due to the chemotherapy treatments he had to undergo, his classmates at school would laugh at him. They even made false rumours about him, saying how his cancer was ‘contagious’.

Tyler and his brother,  Adam at home.
Source: Instagram/tylerbutlerfigueroaviolinist

Thankfully, Tyler pulled through and found refuge in playing the violin. His interest in the violin was sparked when he came across a flyer at school offering free violin lessons. Tyler immediately jumped at the opportunity – “when I play the violin, it helps me forget about all the bad stuff. I just didn’t want to be the kid with cancer. So now, I’m the kid who plays the violin.” Little did he know, this would be a turning point in his life.

After years performing on the streets to raise money for the audition on America’s Got Talent, he came on stage and melted the hearts of the judges and the world at large with his rendition of Kelly Clarkson’s hit song ‘Stronger’.

Simon Cowell was moved by his performance that he gave him a golden buzzer. His performance even gained the attention of pop star, Kelly Clarkson who gave him a shout-out on her Twitter account.

Congratulations, Tyler! You definitely proved that ‘what doesn’t kill you only makes you stronger’!

We wish you success and can’t wait to watch you perform again.

Watch Tyler’s soulful performance on America’s Got Talent below: