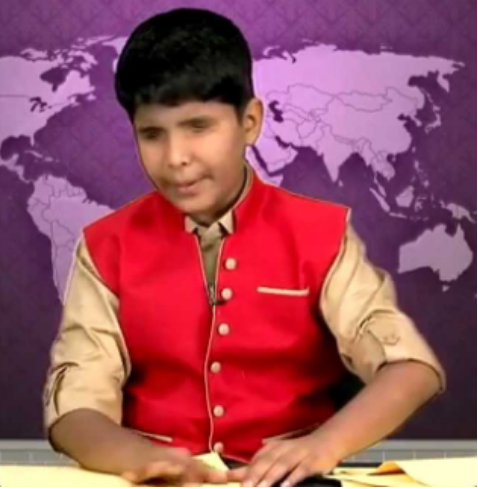 For some people like R.Sriramanujam, there is a great scope despite being blind. He was not someone who usually cursed his fate but instead, he decided to change his chapter by achieving something great in his life. This goes to show how determined he is.

He approached his life with a fresh perspective and today he is the world’s first blind news reader. Hailing from Tamil Nadu, he has received praises for his attitude. He may not see the whole world but he made the whole world see him. This sums up the essential Sriramanujan for you!

The 14-year-old T Sriramanujan is visually impaired since his birth but that didn’t stop him from fulfilling his evergreen dream of becoming a news anchor. He went live for 22 minutes on the Lotus News which is a satellite television channel based at Coimbatore. Thus he became world’s first visually impaired news anchor as claimed by the channel.

Sriramanujam is a student of the blind school and reads the special news live with Braille-reading technique. He developed the habit of reading through fingers. He shared his first experience that he was petrified with fear when he was actually reading the news for the first time. But after going about his business, he had gone from strength to strength to cover topics such as national, sports and entertainment news.

He told the Hindu, “I was trembling with fear when I read the first news. But, on reading it, I gained confidence and read the remaining 30 news items in my half-hour slot covering topics such as national, sports and entertainment news.”

Sriramanujam was blissfully pleased as punch that Lotus news channel has offered him a wonderful opportunity to showcase his mettle. He can now breath a sigh of relief to say that his long-cherished dream of becoming a new anchor is finally accomplished. He wishes to do it better as the days progress.

Channel Chairman, identified as G K S Selvakumar told PTI that the main aim of introducing the visually handicapped boy was to promote and create awareness on eye donation among the public, “So that such talented people get their vision back and achieve their goals.”