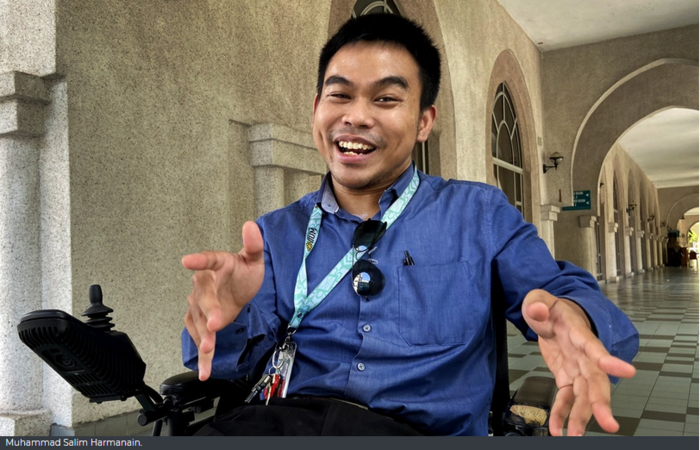 Muhammad Salim Harmanain has a law degree and completed his chambering four years ago which in itself is a huge achievement for him considering that he is a wheelchair user and only his left hand is fully functional.

However, he is forced to put aside his ambition of working as a lawyer simply due to the lack of facilities for people with disabilities (OKU) in workplaces.

For five years, Muhammad Salim, 29, who has triplegia cerebral palsy, overcame all kinds of constraints to study diligently for his law degree at the International Islamic University Malaysia (IIUM).

“However, I now feel defeated… I wish our country had more workplaces and buildings equipped with disabled-friendly facilities,” he told Bernama.

He said there are many disabled people in this country who have the necessary educational qualifications and capabilities but the lack of disabled-accessible infrastructure is denying them their right to pursue a career.

Muhammad Salim, who is from Banting, Selangor, is currently pursuing a Master’s degree in educational psychology at IIUM.

GET RID OF STIGMA

In order for inclusive infrastructure programmes to take off in this country, the public must first get rid of the stigma that people with disabilities are weak and helpless and always seeking the sympathy of others.

“The perception that we are weak because of our physical disabilities has prevented us from expressing our true potential,” said Muhammad Salim, adding that he hoped employers would give them a chance to prove their worth.

“To enable the OKU community to build self-confidence, be more sociable and learn to stand on their own feet and not be a liability, we need the support of everyone – employers, colleagues, the community and our families.”

Pointing to a policy introduced by the government in 1988 to allocate one percent of jobs in the public sector to OKU, he said the target has yet to be achieved.

“More than 30 years have passed since the policy came into existence… employers in the public and private sectors should be more open to hiring OKU and offering them jobs that suit their potential and qualifications,” he added.

On Nov 21, 2018, the then Deputy Human Resource Minister Datuk Mahfuz Omar admitted that the percentage of OKU employees in the public sector stood at 0.29 percent, which was below the one percent target, of the 1.6 million workforce.

According to statistics by the Public Service Department, the percentage remained at 0.29 percent, or 3,686 OKU employees, as of June 30, 2019.

According to media reports, the Ministry of Women, Family and Community Development succeeded in achieving the one percent OKU employee target in 2017.

Muhammad Salim said most employers may not be aware that the government is giving incentives to companies and agencies that offer employment opportunities to the OKU, as well as provide disabled-accessible facilities inside buildings. The incentives provided include tax exemptions.

Malaysian Foundation for the Blind chief executive officer Silatul Rahim Dahman attributed the failure in realising the one percent OKU staff policy to weaknesses in its implementation, as well as the inability to get ministries and government agencies to support the policy.

“To enable the OKU to work, the government should perhaps establish a special industry run by the disabled people themselves with minimal help from able-bodied persons,” he said, adding that the issue of providing job opportunities to the OKU has been long-standing and yet to be resolved.

Companies, particularly those that are profit- and productivity-oriented, have all kinds of excuses for not hiring disabled workers, said Silatul Rahim, adding that the lack of accessibility at workplaces and public transport system also served as a stumbling block.

She said with consistent guidance and mentoring, they would be able to determine their purpose in life and get a job that suited their interest.

“Such a support system is necessary to ensure that the OKU do not get stuck halfway. It should start from school and continue until college or university to prevent them from going astray after graduating,” she said.

She said the nation must start moving towards empowering the disabled community and safeguarding their rights.

“Their progress will be slow if we were to only care for them in terms of their welfare,” she added.

While Malaysia has a good policy in place insofar as the development of the OKU community is concerned, its implementation and monitoring have to be strengthened further, said Hasnah.

She said the United States, for instance, has its Americans With Disabilities Act 1990 that prohibits discrimination against people with disabilities at the workplace, school, public transport and any public or private place.

“The Act is aimed at ensuring the disabled community is given the same rights and opportunities as other people.

“Under the Act, the government provides incentives to employers and organisations if they can show proof that they have disabled workers in their payroll,” she said, adding that Malaysia should also introduce a similar law to protect the rights of the OKU.

If the government does not exert itself to provide an inclusive environment in the job sphere, the disabled will continue to be a burden on the national welfare system, she said.

“It’s more economical for us to train and employ the OKU rather than leave them dependent lifelong on welfare benefits,” she added.