Ibrahim Kholy: first Egyptian with Down syndrome appointed as a teaching assistant 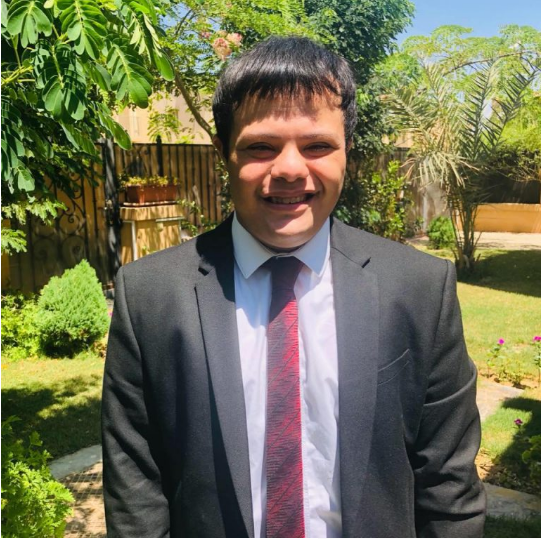 Ibrahim al-Kholy, an Egyptian who was born with Down syndrome, was appointed as a teaching assistant in the University of Canada in Egypt’s Mass Communication, Radio and Television department.

The 24-year-old fresh graduate launched his academic career this October in the same university, where he also received his bachelor’s degree.

“The University of Canada in Egypt, led by its President Mhamoud Abo Elnasr and the whole board, are the pioneers who first implemented the inclusion system in university faculties,” Kholy stated during his interview on Al Ghad (Tomorrow) TV. Kholy further pointed out that there is a special system customized for students with disabilities that has been implemented across the university’s faculties.

“Under the same system, I was appointed as a teaching assistant,” he mentioned, also paying tribute to all the support he received over his past years in the university.

Kholy said he chose the department of mass communication due his deep love and enthusiasm for the camera, editing, lighting and more. “My dream is to become a TV presenter,” he stated.

Kholy’s mother said in the same interview that 24 years ago, it was generally believed that people with disabilities will never accomplish anything. However, she strongly believes that her son’s future will be crowned with numerous achievements.

Besides his eagerness to carve out a promising career, the newly hired TA is also a sports champ who is currently representing Egypt at a tennis championship in Brisbane, Australia.

Kholy started his sports career at an early age and earned second place in his first international sports championship, which was held in Italy in 2008 when he was 13.

This year a significant joint collaboration was launched between Orascom, the European Union and UNICEF. The collaborative forum was titled “Empowering inclusion of the differently abled” and was attended by representatives from Egypt’s private and governmental sectors. The forum discussed the importance of issuing legislation that secures the inclusion people with disabilities in varied vocational sectors.

Similarly, for the first time in Egypt and the Arab world, the “UN-ARTS” committee on the Rights of Persons with Disabilities in Egypt selected Egyptian swimmer Mohamed al-Husseini, born with Down syndrome, as the committee’s official spokesperson in Egypt and abroad, according to a prior official statement from UN-ARTS, in June 2019.