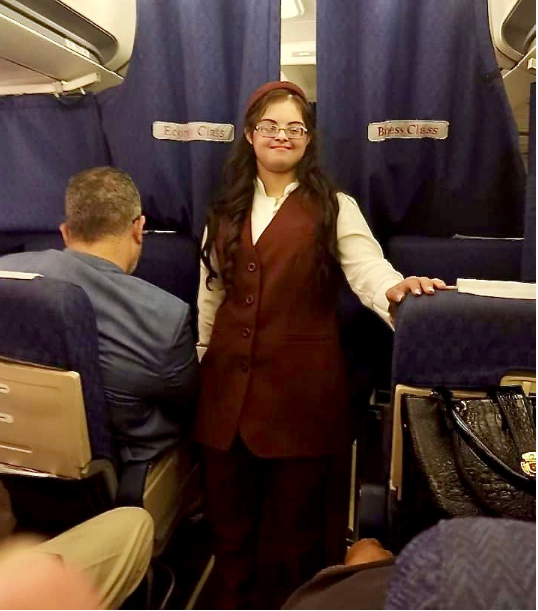 Heba Atef became the first-ever Egyptian flight attendant with Down syndrome to embark on a special flight from Cairo to Khartoum entitled “The Journey of Humanity,” starting on Saturday, November 30 and lasting until Thursday, December 5.

Atef, a student at the Arab Open University in Egypt (AOU), accompanied a group of passengers with special needs alongside their families during the journey.

In collaboration with the Badr Aviation Company and Smart Mind Training Center in Khartoum, the remarkable “Journey of Humanity” took place under the sponsorship of the UN International Committee and was specifically tailored for people with special needs.

A flight attendant’s uniform was customized especially for Atef, according to her mother, with Atef asserting that the experience did not frighten her, Hon News outlet reported.

A previous interview with Atef on OnE Channel revealed that she has overcome a number of challenges, especially in 2011, when she was diagnosed with blood cancer. However, Atef fought the disease courageously, winning her battle with cancer after five grueling years.

Atef was also persistent in completing her education despite her illness, discovering after attending university that she was the only student with Down syndrome in her classes, according to the same interview.

No challenge is too big for Atef, however, who joined the department of Radio and Television at her university, launching her career as a TV presenter. She presented at the Bokra Ahla (Tomorrow is Better) Conference addressing people with special needs and has been honored by Rotary Port Said and 57357 Hospital as well.

Meanwhile, Atef’s passions are diverse, citing an interest in music as well as drawing and painting. Remarkably, she was invited by the UN’s cultural committee alongside the Belgium Embassy in Cairo to showcase her painting in a ceremony celebrating various art works by contemporary artists. Atef was honored at that event, with 17 people form countries around the world signing her painting.

Atef is known for motivational quote that reads: “We teach people love and a desire to be alive — we are here to put smiles on people’s faces and give them hope.”

Back in June, the “UN-ARTS” committee on the Rights of Persons with Disabilities in Egypt selected Egyptian swimmer Mohamed al-Husseini, who was born with down syndrome, as the committee’s official spokesperson in Egypt as well as abroad.

In October 2018, Ibrahim al-Kholy, another Egyptian born with down syndrome, was appointed as a teaching assistant at the University of Canada in Egypt’s Mass Communication, Radio and Television department.

Meanwhile, a significant joint collaboration project was launched this year between Orascom, the European Union and UNICEF.

The collaborative forum was entitled “Empowering inclusion of the differently-abled” and was attended by representatives from Egypt’s private and governmental sectors. The forum discussed the importance of issuing legislation that secures the inclusion of people with disabilities across various vocational sectors.

A newly released report by UNDP indicates that there are nearly 12 million people with special needs in Egypt.