Down the entrepreneurial path for disabled graduate 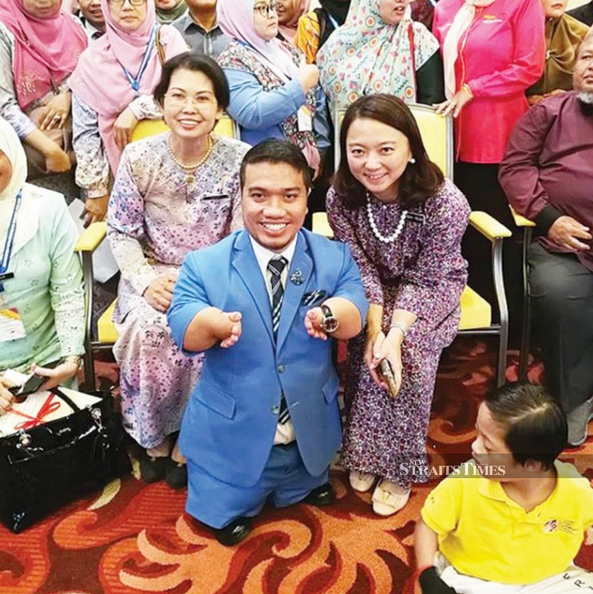 Self-employment is something persons with disabilities (PWDs) could consider.

The lack of employment opportunities notwithstanding, it may just pay off handsomely, as attested by Mohd Sukur Ibrahim, who hails from Sungai Udang in Melaka.

The Information Technology (IT) graduate from Universiti Kebangsaan Malaysia has been providing customised carpet installation to various surau, mosques and offices around the country since 2010. His company, D Strike Solution, is based in Bangi, Selangor.

Sukur, 36, who was born with stunted limbs, is also a motivational speaker and a writer of motivational books.

“When I was applying for a place in university, my lecturer at the Melaka Matriculation College advised me to take up IT as jobs in information technology would not be too physically demanding for me.

“I excelled in maths and physics and harboured an interest in engineering but he convinced me the field work and site visits would prove too challenging.

“So I took his advice and did quite well though I was not really passionate about IT. Upon graduation, I applied for jobs in the public sector and also sat the diplomatic administrative officer examination. I went to countless job interviews without success. My parents kept insisting that I continue trying, citing job security and the steady income,” he said.

But Mohd Sukur eventually gave up applying for jobs and decided to venture into business. Carpet installation was his fourth attempt. His parents were sceptical, afraid that he would get fleeced by unscrupulous people.

“My first job was to supply wall-to-wall carpeting for a friend’s office. I looked for a supplier online and a contractor for the project. The job cost RM20,000 which I borrowed from my elder sister. The customer was satisfied with the work and I was able to return the capital to my sister.

“I continued with online and web marketing for the business. While there is scepticism from prospective customers because of my physical appearance, my business is growing. Today, I have five workers and hope to provide opportunities for other PWDs in terms of building up their own businesses,” he said, adding that his parents were now proud of his success.

Sukur said he never used his disability as a way to get business but instead worked hard to prove his merit.

Asked whether he regretted studying for a degree as he is now an entrepreneur, Sukur said the discipline, skills, and networking gained at university proved useful in his business.

“Furthering one’s studies is a responsibility to one’s self and family. Qualifications gained can help you look for a job or, like me, help you with entrepreneurship. With knowledge, one will not be easily duped by fraudsters,” he said.