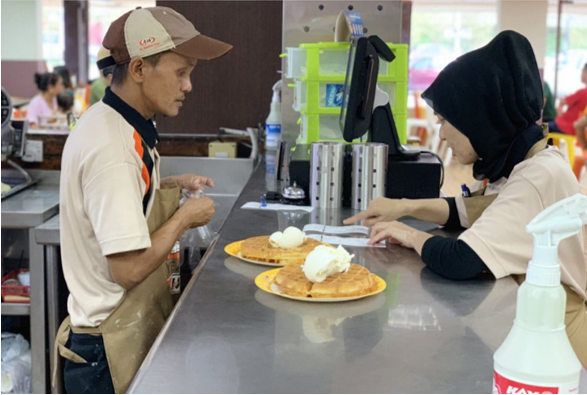 An iconic fast food spot in Petaling Jaya has been in the spotlight for hiring senior citizens and people with disabilities.

A Twitter user known as Cikgu Brian recently posted about his visit to A&W on Lorong Sultan and how impressed he was by the restaurant’s diverse group of employees.

“A&W Petaling Jaya has gained my respect for hiring the hearing-impaired and senior citizens.

“It not only makes this a family-oriented environment but it also gives the staff a chance to feel wanted and respected,” he wrote.

His followers then chimed in to applaud A&W Malaysia for providing elderly folk and disabled people with work opportunities.

“This is great, they’re giving a chance for disabled people to work.

Brian’s post also brought back a sense of nostalgia for customers who have been patronising the outlet since it opened its doors in 1965.

“Stepping into this A&W feels like going back in time to the 1990s. All of a sudden, it feels like time moves slower here.

“Also, customers are literally talking and chatting. Not many are playing with their phones.

“I don’t know why but the atmosphere here is unique,” said AnisKhalidi.

“I feel young every time I enter an A&W. (This was where I came for) dating, skipping class, and chilling out on weekends,” wrote KarolAriffSaid_.

A&W Malaysia also responded to Brian’s tweet and thanked him for sharing the touching story with his audience.

Despite the heartwarming news, the outlet in question won't be around for much longer after A&W Malaysia’s former owners KUB Malaysia Bhd sold off the 0.42-hectare plot of land last year.

A&W Malaysia’s new chief executive officer George Ang said in March that the fate of the Petaling Jaya drive-in remains unchanged and will be demolished by the end of 2019.