At 24, This Model With Down Syndrome Has Appeared On The TODAY Show And Signed With Three Different Agencies. She Says She’s Just Getting Started. 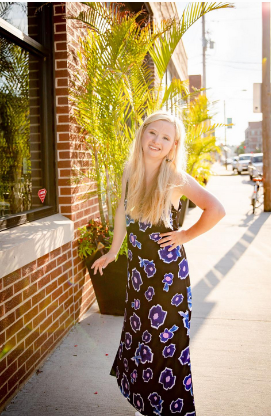 Grace Strobel has been making waves in the fashion industry for several years as a model, with her stunning photos seen around America and the world. She's quickly becoming a household name, as people learn about the 24-year-old who has Down Syndrome, from her appearances on local and national television and in the media.

This year, Strobel, from St. Louis, Missouri, was asked to participate in a campaign that fell close to her and her family's hearts: she modeled for Alivia, a womenswear brand inspired by the artistic expressions of individuals with developmental disabilities. The brand launched in April, and every piece of clothing begins as original artwork - created by someone with a disability - and is then transformed into bold prints and embroidery on apparel.

"It was exciting and fun. I love the dresses, and the whole shoot was a dream come true," Grace said.

The photoshoot was held the last weekend of June in Kansas City, Missouri. Grace got to model multiple looks and garments of clothing in various landscapes and with different backgrounds from beautiful fields to the cityscape. The pictures were posted on the fashion brand's website just a few weeks later.

"It means the world to us for Grace to represent a brand that believes in everything we're doing, and brings respect and dignity to people with disabilities," said Linda Strobel, Grace's mother.